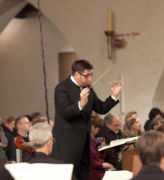 Horst Frohn studied voice at the Staatliche Hochschule für Musik Rheinland (State College of Music, Rhineland) with Prof. Rudolf Bautz. After finishing vocal studies he started his musical career as a member of the WDR-Rundfunkchor in Cologne. He continued his career, as tenor soloist, first at the Deutsche Oper am Rhein in Düsseldorf, later at the Landestheater Coburg and, thereafter, at the Städtische Bühnen Regensburg. There he sang various leading parts in operas and operettas. As a lyric tenor he was invited to give guest performances in Detmold, at the Cologne Opera, in St. Moritz, and in Davos. Also he performed, both nationally and internationally, in many concerts as oratorio- and lieder singer.

Having founded the "Vocalensemble Laaber" (today: Chorphilharmonie Regensburg), he became a commited conductor and choir director. He took part at numerous master classes at home and abroad, for example in Montbozon, France, with Sergiu Celibidaches long-time personal assistant Konrad von Abel. Frohn‘s repertoire includes the great choral works as well as orchestral literature. He conducted performances of Händel's Firework- and Watermusic and many of Bach‘s orchestral works, Mozart's Jupiter Symphony, Beethoven‘s Symphony No. 9 , the wind serenades by Dvorak and Gounod as well as the "Kindertotenlieder" by Gustav Mahler.

Horst Frohn successfully worked together with the well-known mountain photographer Bernd Ritschel, conducting music from Gluck, Haydn, Mozart and Barber, while showing more than 300 photos of mountains from all around the world. The choir benefits to a large extent from Frohn’s vocal education. During their rehearsals, the choir singers not only learn their notes and composition: Frohn also takes care of their voice training and development. .

Since 2009, Mr. Frohn acts as a guest-conductor in more or less regular intervals. His extremely successful collaboration with Japanese choirs and orchestras has been initiated by Prof. Hidenori Komatsu, a well-known Japanese baritone. Invited by the Choral Arts Society Tokyo as well as by the chamber choir of Kobe, Frohn conducted in Tokyo and Kobe Mahler's "Kindertotenlieder", The "Deutsches Requiem" by Brahms, Dvorak‘s "Stabat Mater", Händel's "Messiah", Verdi's "Totenmesse", Mozart's Requiem as well as the oratorio "Vier Jahreszeiten" composed by Haydn. In 2013 Frohn initiated a special pedagogic project: The "Pupils Dance Project" put about 200 pupils of Regensburgs middle schools on stage. They performed a choreography accompanied by Carl Orff's "Carmina Burana", sung and played by the choir and orchestra of the Chorphilharmonie Regensburg and the Regensburger Domspatzen.